21 Fascinating Exercise Statistics You Should Know in 2021

Nowadays, people spend most of their time sitting either at work or at home. We even travel to work by car or public transport. And when we have some free time, we tend to watch TV or surf the net. As a result, we’re much less active than we should be. Just look at exercise statistics for proof.

Many people disregard the World Health Organization’s recommendations for physical activity, even though exercising has numerous health benefits. Additionally, a sedentary lifestyle can lead to several serious diseases. Still, most of us sit for more than seven hours a day. 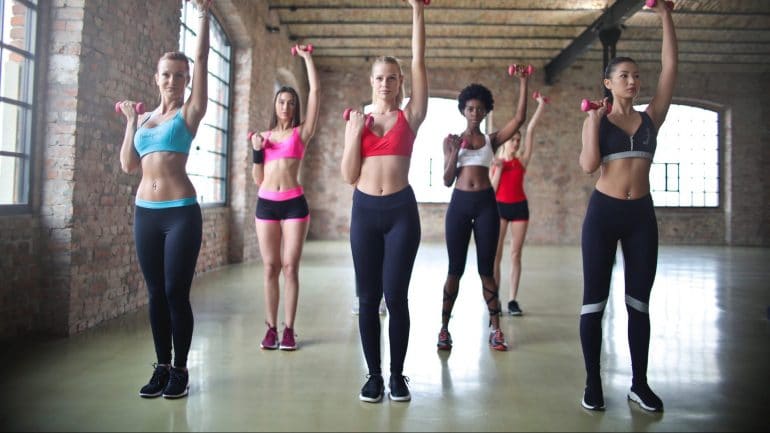 Here, we’ll be looking at general facts about physical activity and exercise.

1. Only 23.2% of US adults met the recommendations for weekly physical activity in 2018.

According to the 2008 federal Physical Activity Guidelines for Americans, adults aged 18 and over should do moderate aerobic exercises for at least 150 minutes a week or vigorous aerobic exercise for 75 minutes a week. Additionally, they should strengthen their muscles at least two days a week. However, less than 5% of US adults participate in physical activity for 30 minutes a day.

Despite being a negative statistic, it’s an improvement on 2018 and 2017, when 27.3% were inactive. After the global pandemic that hit in 2020, it will be interesting to see the latest statistics on this since many were self-isolating.

4. 35.9% of Americans participated in high-calorie burning activities in 2019.

Cardio exercise statistics show that this number was the same for 2018. But in 2017, the percentage of people participating in high-calorie burning activities was 35.7%, which shows a small improvement.

Compared to other US states, they were the least likely to report exercising on a regular basis. According to American exercise statistics, West Virginia (47.1%) and Alabama (47.5%) followed closely. On the other hand, Vermont had the highest percentage (65.3%) of adults who reported exercising three or more days a week for at least 30 minutes.

6. The US takes 46th place on the list of the most inactive nations in the world.

According to recent research, first place went to the Republic of Malta, where 72% of people don’t get enough exercise. Swaziland (69%) and Saudi Arabia (68.8%) are among the top three, while Serbia and Argentina follow closely (68.3% each). This study’s physical activity rates by country showed that Bangladesh was the most physically active nation, with only 4.7% of people not exercising enough. 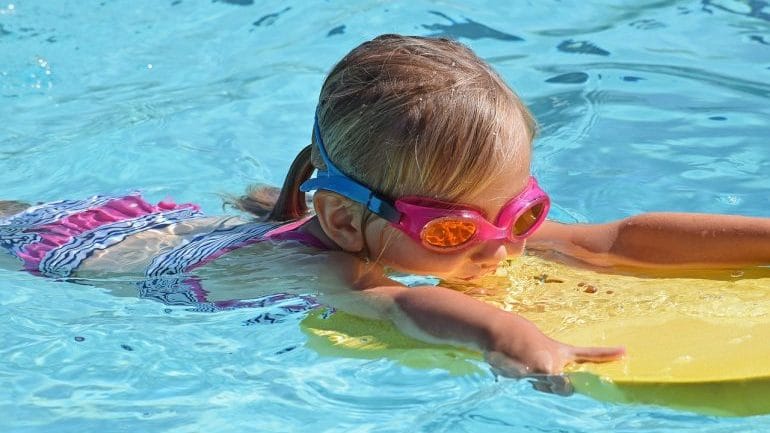 7. Only a third of US children are physically active every day.

This is a disturbing fact since a lack of physical activity is one of the leading causes of obesity, cardiovascular diseases, diabetes, and cancer. It’s vital to promote the benefits of exercise, starting with our kids. It’s shocking that children now spend more than seven hours a day glued to a screen. This is one of many disturbing physical activity trends.

8. Only 20% of US adolescents met the guidelines for both muscle strengthening and aerobic physical activity in 2017.

According to the guidelines, adolescents should do muscle-strengthening activities at least three days a week and participate in at least 60 minutes of aerobic physical activity every day.

Additionally, exercise stats reveal that 35%–44% of seniors aged 75 or older participate in physical activities. However, the World Health Organization recommends that people aged 65 or older engage in a physical activity of moderate intensity for at least 150 minutes every week.

10. Adults aged 18 to 24 were the most likely to meet the recommendations for aerobic physical activity in 2018.

64.8% of US adults in this age group met the 2008 federal Physical Activity Guidelines for Americans. Based on these workout statistics, they were more physically active compared to other age groups.

Notably, 54% of men meet the guidelines compared to 46% of women. Additionally, there are also some differences between genders when it comes to motivation. For example, most men feel awkward at group classes while women generally find them motivating.

12. The lower the household income, the greater the inactivity rate.

13. Adults with a college degree are more likely to meet the 2008 Physical Activity Guidelines than those with a lower level of education.

Adults with a college degree are the most likely to meet both the aerobic and muscle-strengthening guidelines, at 27.4%. On the other hand, only 12% of adults who had less than a high school diploma did the same. 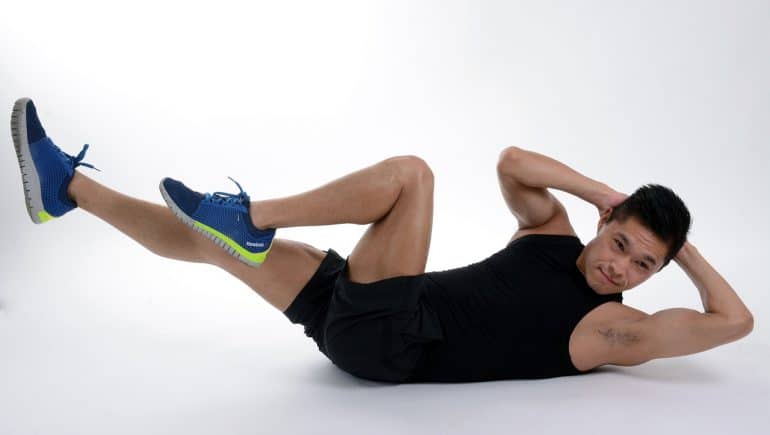 There are many benefits to physical exercise. Here, we’ll be focusing on a few of those benefits.

14. Physical activity can lower the risk of coronary heart disease.

Research suggests that higher levels of physical activity can reduce the incidence of coronary heart disease by 21% for men and by 29% for women.

15. Regular physical activity can lower the risk of type 2 diabetes by up to 50%.

Additionally, working out on a regular basis can lower the risk of osteoarthritis by 83% and reduce the risk of a hip fracture by 68%. It’s also associated with a 30% lower risk of depression and dementia.

16. 67% of vigorous exercisers report having a good night’s sleep every night or almost every night.

On the other hand, these same exercise facts indicate that a considerably smaller percentage (39%) of non-exercisers report the same. Besides bringing amazing health benefits, physical activity also contributes to better sleep. That’s why people with sleep problems, especially insomnia, are often advised to exercise regularly but not close to bedtime.

17. Insufficient physical activity increases the risk of death by 20% to 30%.

According to the WHO, people who don’t exercise enough are more likely to die prematurely. In fact, sedentary lifestyle statistics reveal that physical inactivity is one of the major risk factors for mortality in the world.

In this section, we’ll be exploring different habits that surround exercising.

18. The most popular forms of exercise in America in 2019 were fitness sports.

67.3% of Americans participated in fitness sports. In second place was outdoor sports with 50.7% participation. The third most popular type of exercise was individual sports at 45%. The exercise with the least amount of participation was winter sports.

19. Over 50% of mobile phone users in the US have downloaded at least one fitness app.

It’s estimated that there are more than 8,000 apps dedicated to health and fitness, with Fitbit being the most popular. This app has more than 10 million US users.

20. About 50% of people who start a workout program quit exercising within the first 6 months.

Research on exercise facts and statistics shows that people will usually drop out of their exercise program early on.

It’s estimated that over half of this sum was spent on treadmills, exercise bikes, elliptical machines, and other cardiovascular fitness equipment. Additionally, Americans spend about $27 billion on yoga products every year.

Along with healthy nutrition, physical activity is one of the pillars of our wellbeing. It decreases the risk of serious medical conditions, such as diabetes and heart disease, and improves our overall health. Nevertheless, as the statistics on exercise show, a huge number of people all around the world don’t exercise enough.

Most of us lead sedentary lifestyles partly due to our jobs and partly because we spend too much time in front of screens in our leisure time. Hopefully, the above-mentioned facts make it clear enough how important physical activity is for us. So no matter what your favorite activity is—be it hiking, swimming, or snowboarding—try sitting down less and moving more.

How much should the average person exercise?

What age group exercises the most?

According to a recent survey conducted among US adults, people aged 18 to 44 are the most physically active. In this age group, about 59.7% of the respondents said they exercised at least three times a week for at least half an hour.

How much of our population is physically active?

In the United States, around 5% or less of adults do 30 minutes or more of physical exercise every day. Furthermore, only one out of every three adults gets enough exercise every week. This shows that not nearly enough people get the recommended amount of exercise they need to be healthy.

Which country has the fittest population?

Uganda and Finland are the top countries when it comes to having a fit population. People in both of these countries tend to incorporate physical activity into their daily lives, as well as play sports for fun, according to exercise statistics from throughout the world.